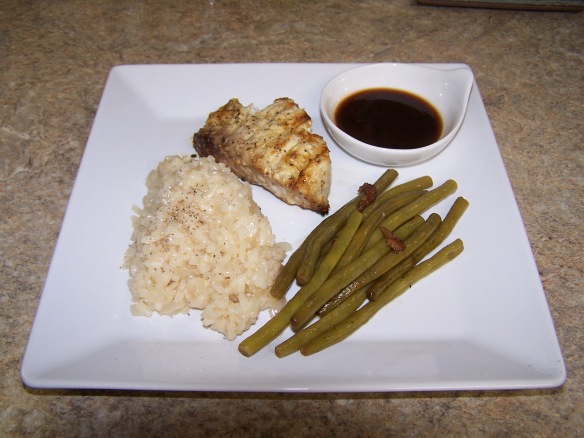 The Little Woman has never eaten shark.  That was good news to me when we were at the market yesterday and found black tip shark on sale.  We bought three nice fresh fillets for about $5.  Most people will not go out of their way to eat Jaws.  I love shark, as I do any seafood.

Speaking of which, did you know in the world approximately:

AND, approximately one food blogger is killed each year by his readers because he tells a long story before getting to the recipe.

Before cooking, baste the shark in:

Whisk all together a brush on the shark.  The olive oil protects the shark from burning.  I always brush the food with olive oil before grilling.

Grill the shark 8 minutes a side on high heat.

In a small sauce pan, heat all ingredients together.  The stock thins the Hoisin for dipping.

Fry bacon in the bottom of a 2 quart sauce pan, add olive oil, on high heat, drop the beans in the pan and stir, add the rest of the ingredient and stir until steam starts to form, turn off heat, cover and the beans will steam to al dente.

See recipe on the Recipe Page for Italian Rice.