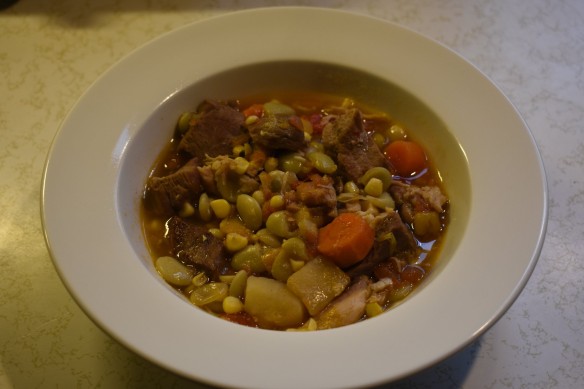 This dish was totally extraordinary.

Burgoo is said to be the name of an oatmeal porridge served to English sailors in the 18th century and beyond. Burgoo of yesteryear had any meat available to the hunter. Akin to gumbo in many ways it does not depend on a roux. It is just a pot of pretty much anything handy. “Kentucky Burgoo is eaten all year around, but like most stews, it’s popular in the colder months. It is also a traditional part of Derby Day in Louisville, along with the official drink, the Mint Julep.” It should be cooked in an iron pot. 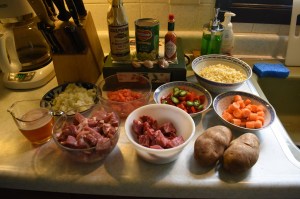 Brown the pork and beef in olive oil and remove.

Sauté the veggies except for potatoes and lima beans. 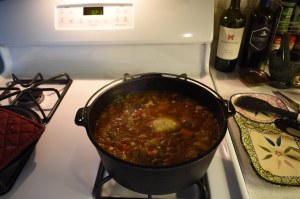 Return the meat, add the potatoes and add the liquids. Bring to a boil, and then set the temp to low and cook slow 2 hours. Remove the chicken, debone and deskin and pull the meat apart and return the meat back to the pot.

Add the Lima beans, Tabasco and Worcestershire and cook another 20 minutes on low.

Turn off heat and let rest 5 minutes before serving.