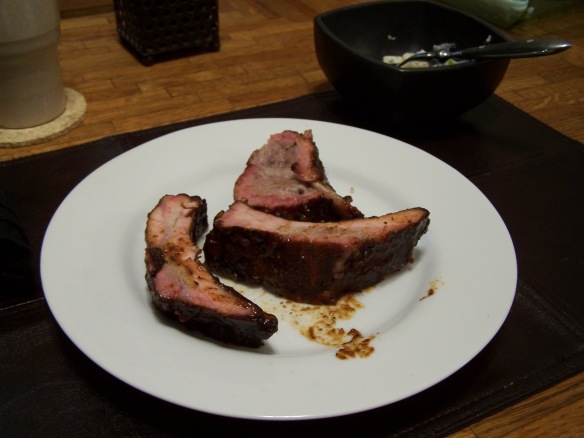 Smoking meats is an art in most states. Each state has its own style of shakes, rubs, smoking wood, sweet, sour, pepper heat, sauces from butter and brown sugar, to no sauce, to what we use here, a sweet tomato sauce.

The trick is in the wood. I mostly use apple wood but you will experiment with your best flavor.  A real good hardwood is always recommended in addition to coals.

Rib meat needs a good rub or shake. Actually it is a lot of spices to shake on the meat and then rub into the meat before cooking. The spices neutralize any gamy flavor in the meat and adds flavor and sometimes a little heat if you like to add cayenne in the shake.

When eaten, professional ribs are supposed to come off the bone with a little tug when biting the meat away from the bone. I actually like mine to come easily off the bone.  Now, some people go so far as to par boil ribs first but I advise against that.  Par boiling changes the texture and robs the meat of flavor.  I did that once, it isn’t any good.  The technique used to get the meat to fall off the bone is to wrap them in aluminum foil and steam them in their own juices. The other important steps is not to add any sugar or sugary sauce until the last 20 minutes of cooking.  Sugar will burn, which ruins the texture and the taste.

To baste the ribs, fill a spray water bottle with 1 cup apple cider vinegar and 1 cup of water. While smoking the ribs, turn over the meat and spray the meat on both sides with the baste to regenerate moisture.

Prepare the racks by pulling away the membrane on the bottom along the bone and trim any excess fat.

Shake (for one rack of ribs) 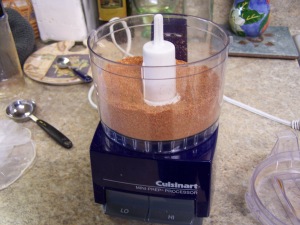 In a small food processor mix:

Rub the shake into the meat and let rest for about an hour in the refrigerator or at room temperature.

Get the smoker ready.  I use a smoker with a side box.  I start a small bundle of coals in the side box then place the wood on the coals.  The ribs should cook at  200° to 250° for three hours directly on the grill.   Then wrap the ribs in aluminum foil and either continue cooking on the grill or what I do at this point is place the wrapped ribs in the 225° oven for two hours. 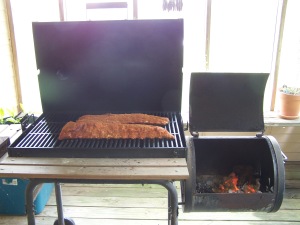 After cooking 5 hours, test the meat to see how much longer they should be cooked.  (Cut one off and eat it)  Then open the foil and lather the BBQ sauce onto the ribs.  Cook another 20 minutes to an hour depending on your desired tug.  This technique lets the BBQ sauce caramelize and glaze onto the meat. Remove and cut the rack into single ribs.

When eaten the meat has a smoky wood flavor fused into the smoke ring (pink ring).  Lot of flavors, lots of enjoyment.  Finger food, serve with damp washcloth.